Some competitions allow the team to have 4 quarters, while some other leagues limit the length of the basketball game to only 2 halves. The length of the games varies depending on whether you are playing at the high school level, NBA, NCCA, or college games.

An NBA match almost lasts for 2 hours just because the length of the quarters is slightly higher than the other platforms. The only thing that remains the same throughout the game is the overtime. Some of the leagues and competitions have overtime of about 5 minutes while the high school level and college games usually have overtime of 4 minutes.

If we talk about the length of the timeout it is much shorter than the quarters it’s a kind of signal that the captain gives to discuss their strategy in the middle of the game and is usually about 30 seconds to the maximum.

Here in this article, we will discuss the length of the basketball game, length of the halftime at different levels the game is played at which includes NBA, NCCA, high school level, and college games. 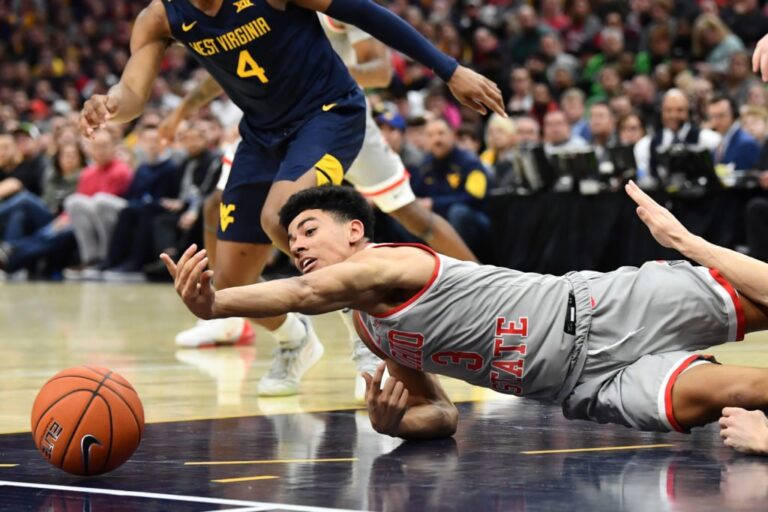 As the introduction says that the length of the basketball game usually depends on which platform you are playing and here we are gonna discuss the length at NBA, NCCA, high school level, and college games.

An NBA game has 4 quarters each of 12 minutes that means the total game time is 48 minutes but it usually stretches to about 2 hours because of the fouls, free throws, tv commercials, timeouts, and whatnot. However, in the postseason game is much longer than usual because of the substitutions and shooting fouls.

Basketball games played at the Olympics are usually shorter than that of the NBA. They only offer you a total of 5 timeouts which is much less than that given to the team by the NBA.

The interest in this game usually starts at a younger age and students are always looking for an opportunity to improve their skills.

It has 4 quarters of about 8 minutes each that means the total length of the game should be about 32 minutes but it stretches to about an hour and a half because of the fouls, free throws, and timeouts. And the players usually get a 10-minute break between the 3rd and the 4th quarter.

Unlike other basketball games college games only have 2 quarters and each quarter is 20 minutes each. And in between the halves, there is a 15-minute half time. While usually, we see the game lasts for about 2-3 hours but it is much shorter at college levels.

WHAT IS A TIMEOUT, HOW LONG DOES IT LAST?

It is a period that is given to the team where they can sit in the sideline and rest and discuss their strategy for the rest of the game. The length of the timeout varies depending on the league in which you are playing plus the rules for the timeout also vary depending on the tournament/league. Below are the timeouts in different games: Who can call timeouts in basketball?

How do you signal a timeout in basketball?

In basketball, you get one timeout in each quarter but in the last quarter, you get two timeouts. When the coach signals the referee for a timeout there is a special sign that the referee signals and also blows whistle with that.

The finger points into the palm of the other hand to make the shape of the letter T.

What happens at halftime in basketball?

Halftime is different from a timeout. It gives more time to the players to rest and recover and to prepare a strategy for the other half of the game to come.

Players and their coaches go to their locker rooms to strategize for the other half. The play is suspended during this period. This gives the team a long time to think and rest or to make any other changes they want to make.

What is the difference between a timeout and halftime?

Timeout and halftime are almost the same things both have the same purpose to give time to the players to discuss their strategy with their teammates.

The only thing that makes them different from each other is the time difference, halftime gives them about 10-15 minutes again it depends on the league in which you are playing while timeout provides you with 30-75 seconds again depending on the league.

Can the team substitute players during a timeout in basketball?

Players playing basketball at the national and international levels have played almost every league whether it be at the high school level or the college games because these are the places where youngsters develop interests in various sports.

The game does not hold according to the regulated time frame. The games usually last much longer than planned. And the reason for the game not ending in the regulated time frame is the timeouts, free throws, fouls, and many other reasons. The concept of the game does not create any difference in the leagues; it is the duration of them that separates them from each other.

Basketball is a game that can never end up with a tie. There is always a winner in every game ever played. The person must be good at the game to understand the intervals properly.

However, in this article, we have provided details of every format in the best way possible whether it be the length of the game to halftime to timeouts every detail. [1]

🥇How To Build A Backyard Basketball Court?
🥇What Is a Triple Double in Basketball? Double Double?
How To Shoot A Basketball Perfectly Every Time?
THUNDER BIG 3: JIGSAW FALLING INTO PLACE
FINDING A BIGGER OFFENSIVE ROLE FOR JAYSON TATUM
THE UTAH JAZZ: JINGLES ALL THE WAY